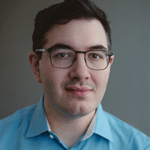 Keyboardist and conductor Jeffrey Grossman specializes in vital, engaging performances of music of the past, through processes that are intensely collaborative and historically informed. As the artistic director of the acclaimed baroque ensemble the Sebastians, in recent seasons Jeffrey directed concerts including Bach’s St. John and St. Matthew Passions and Handel’s Messiah from the organ and harpsichord, in collaboration with TENET Vocal Artists. Jeffrey is a frequent performer with TENET, the Green Mountain Project, the Saint Paul Chamber Orchestra, and numerous other ensembles across the country. He was musical director for the 2019 Boston Early Music Festival Young Artists Training Program, where he conducted Handel’s Orlando from the harpsichord. For thirteen seasons, he toured portions of the rural United States with artists of the Piatigorsky Foundation, performing outreach concerts to underserved communities. Jeffrey can be heard on the Avie, Gothic, Naxos, Albany, Soundspells, Métier, and MSR Classics record labels. A native of Detroit, Michigan, he holds degrees from Harvard College, the Juilliard School, and Carnegie Mellon University. Jeffrey teaches performance practice at Yale University. www.jeffreygrossman.com

Keyboardist and conductor Jeffrey Grossman specializes in vital, engaging performances of music of the past, through processes that are intensely collaborative and historically informed. As the artistic director of the acclaimed baroque ensemble the Sebastians, this season Jeffrey directs concerts including Bach’s St. Matthew Passion and Handel’s Messiah from the organ and harpsichord, both in collaboration with TENET Vocal Artists, and performs Bach’s six sonatas for violin and obbligato harpsichord with Daniel S. Lee. In recent seasons, Jeffrey has performed with TENET, the Green Mountain Project, the Saint Paul Chamber Orchestra, Quodlibet, the Boston Early Music Festival, and numerous other ensembles across the country. For the past thirteen seasons, he has also toured parts of the rural United States with artists of the Piatigorsky Foundation, performing outreach concerts to underserved communities, most recently in Wyoming and southeast Alaska. Jeffrey can be heard on the Avie, Gothic, Naxos, Albany, Soundspells, Métier, and MSR Classics record labels. He was recently appointed a faculty member at Yale University, where he teaches performance practice and works with graduate voice students.

A native of Detroit, Michigan, Jeffrey holds degrees from Harvard College (AB in Music cum laude), the Juilliard School (MM in Historical Performance), and Carnegie Mellon University (MM in Conducting). His principal teachers include Robert Page and Jameson Marvin in conducting; Louis Nagel in piano; Kenneth Weiss and Don O. Franklin in harpsichord. In addition to his performing activities, Grossman is also active as a music engraver (primarily using the SCORE music publishing system) and has prepared editions for many major publishers and ensembles. In 2014, his engraved score of Elliott Carter’s final composition won first prize in the chamber ensembles division of the Music Publishers Association Paul Revere Awards for Graphic Excellence. Jeffrey currently resides in New York City. www.jeffreygrossman.com 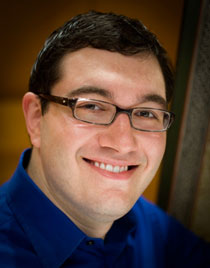 Jeffrey Grossman (email) is a freelance harpsichordist, continuo organist, conductor, and coach based in New York City. He specializes in vital, engaging performances of music of the past, through processes that are intensely collaborative and historically informed. Grossman's extensive instrumental repertoire includes music from six centuries for the piano, fortepiano, harpsichord, and organ, and his work as a conductor encompasses everything from Josquin des Prez to Marvin Hamlisch. Grossman holds a Bachelor of Arts in Music from Harvard College (cum laude, Phi Beta Kappa); a Masters of Music in conducting from Carnegie Mellon University, where he studied with Grammy-award winning conductor Robert Page; and a Masters of Music in historical performance from The Juilliard School, where he studied with harpsichordist Kenneth Weiss.

A native of Detroit, Michigan, Grossman is the artistic director of the acclaimed baroque ensemble the Sebastians. He is currently on the faculty of Yale University, where is a Lecturer in Early Music, teaching performance practice and coaching students in the graduate voice program in Early Music, Oratorio, and Chamber Ensemble.

As a pianist, he has been affiliated since 2005 with the Piatigorsky Foundation, performing more than 180 outreach concerts in 15 states to help bring live classical music to underserved communities across the United States. He was a faculty accompanist for the Berkshire Choral Festival, working with conductors Dale Warland, Philip Brunelle, Simon Carrington, Jane Glover, Heinz Ferlesch, Grant Gershon, Julian Wachner, Robert Page, Kent Tritle, Craig Hella Johnson, and Murry Sidlin. Grossman previously co-founded and served as artistic director of the Cambridge Early Music Project, a Boston-based organization that presented numerous concerts, highlights of which include include Schütz’s Musikalische Exequien and Bach’s Jesu, meine Freude and Magnificat.

Grossman is also active as a recording artist. His first solo piano CD, Cosmic Light (music for piano by Keith Barnard), was released on the Metier Arts label, and Carson Cooman’s Nantucket Dreaming, on which he performs solo and in a trio, was released on Naxos. Previously, he released two recordings devoted to contemporary American composers: New Dawn, with soprano Amanda Forsythe, of Carson Cooman’s vocal works and piano solos (on Albany Records); and the chamber music of Leland Smith with vioinist and violist Sarah Darling (on the Naxos label). The Welcome News: Choral Music of Carson Cooman is his first commercial release as a conductor.

He has also released two solo CDs as part of a personal project that seeks to explore connections among diverse styles of keyboard music from all eras and on numerous modern and historical keyboard instruments. The first CD in this project, There and Back, released in September 2006, includes music by fourteen composers from four continents and four centuries. Reunion/Retrouvailles, the next disc in the series, was released in March 2007. It represents an even wider range of musical styles and composers, from Mozart to Wuorinen, including several world premiere recordings and newly commissioned works.

In addition to his work as a performing and recording artist, Grossman is active as a musical engraver using the SCORE music publishing system, which permits an unsurpassed level of professionalism and polish, in addition to the more commonly-used Sibelius, Finale, and Dorico notation software. Works he has engraved have been performed by organizations fro